The travel industry as we knew it no longer exists.

As strange and dire of a time as it is for travel, many industry experts, entities like IATA, and airlines themselves are now taking the time to hit the reset button and identify new opportunities to drive revenue for airlines in the future. As a member of IATA’s Retail ThinkTank, PROS has the opportunity to listen and understand how many airlines are looking to regroup. Yes, the industry is in a crisis, but it's important to use this opportunity as a chance to reset, redesign, and rethink the travel and be ready to rebound when we come out of this.

In this 2-part series, we will deep dive into some of the ideas the industry is assessing. In this Part 1 we share our ideas like vouchers and memberships that airlines are exploring to accelerate recovery when the time comes. In Part 2 we will talk more about how flight passes and pay as go/pay later models can be an approach for industry rebound.

The concept of a prepaid flight voucher or pass allows a traveler to conveniently pre-purchase a number of flights at an agreed-upon discounted rate to be redeemed and booked at a later date. It’s kind of an a-la-carte ancillary for flight subscription.

In a recent survey, we polled over 250 people and found that 82% of respondents said that if airlines offered a prepaid voucher or pass that offered significant discounts on future flying, they would buy it. The majority of those surveyed indicated that they would be motivated to purchase in advance if the discounts were 50% or more.

Even though the airline would be offering flights at a discounted rate, they are receiving upfront payment for flights that have not been booked, which may be essential for drumming up revenue quickly post-coronavirus.

The idea of prepaid flight vouchers or passes isn’t necessarily new idea, but it is rarely a core feature of airline retail strategies. One of the first airlines to offer prepaid packages of flights to travelers was Air Canada. Air Canada’s Flight Pass product sells its discounted flight packages in two ways: via one-way packages of flight credits or unlimited travel for either 3 or 6 months. One-way flight credits can be redeemed within a selected geographic zone, during specific periods and are typically valid for one year after purchase. Air Canada has additionally sold prepaid Flight Passes aimed at targeted demographics, such as The Student Pass, which is a Flight Pass for university students who want to pre-purchase flights at locked-in prices.

Airlines who have launched pre-paid flight vouchers or products include Air France, AirAsia, British Airways, TAP Portugal, Azul Airlines, and more. The concept can bring flexibility for a traveler and increase their customer satisfaction and loyalty, while generating upfront revenue and cash for the airline. However, there can be some hurdles for airlines to overcome before being successful. For example, today, most flight vouchers look like 3rd party products, not fully integrated airline products. This reduces the credibility of the product offering, its usability, and the overall conversion rates. Currently, most prepaid flight voucher programs today are more complex than booking a normal flight and require that the user select origins, destinations, or geographic zone. These terms work well for customers who have frequent flights between the same origin and destinations, but not those who flight outside of regional or international boundaries.

Another worry for some airlines is potential revenue cannibalization – they do not want to lose revenue from potentially higher paying customers or frequent flyers that have a higher willingness-to-pay. According to the survey, 71% said that if a 50% discount were extended, they would spend at least 500 euros on prepaid flight vouchers. Our recommendation is to offer prepaid vouchers with no geographic limitations and longer periods in which to redeem flights. Instead of geographic zones, pricing could be based on other criteria such as total miles traveled or elapsed travel time.

When most of us think of the word “membership” in the context of airlines, frequent flyer programs such as Star Alliance, Sky Team and One World, probably come to mind first - organizations or alliances of airlines with shared frequent flyer benefits rather than actual memberships. Paid airline memberships are programs in which customers pay a yearly fee in exchange for privileges that are not typically included when buying most flights or that only come with higher tier levels found within loyalty programs. Several airlines that currently offer airline memberships include EasyJet and Wizz. In our recent survey, 79% said they would be interested in buying airline memberships if it came with elite privileges.

The most frequently requested items for membership programs were: 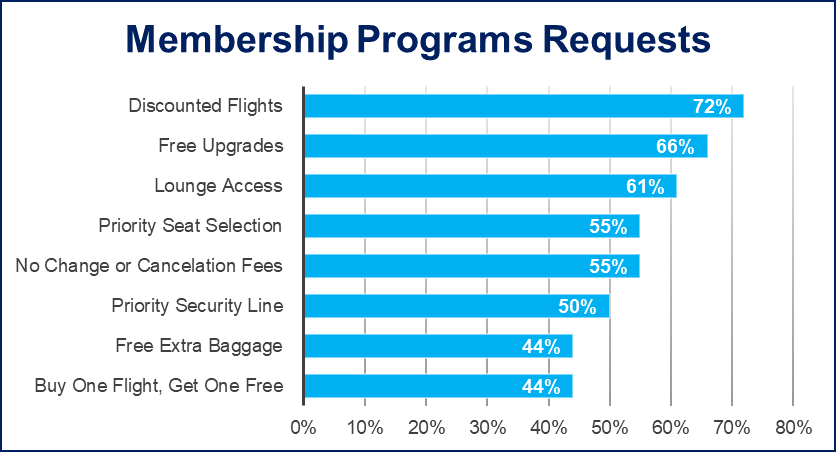 The items that customers were least interested in include:

The EasyJet Plus program is offered for around $250 per year and offers amenities not found as part of the base EasyJet product.  Benefits from EasyJet Plus include allocated seating, dedicated bag drop desks, fast track security, additional cabin bags, speedy boarding, lowest fare guarantee, earlier same-day flights, as well as partner benefits. From 2018 to 2019, EasyJet saw a 52% increase in Plus membership growth and a 17% growth in 2019, so the continued increase in membership shows a demand from airline customers.

Similar to EasyJet, Wizz offers the Privilege Pass for roughly $215 and includes similar benefits including seat selection, priority boarding, extra on-board luggage, etc. Although memberships aren’t that common with airlines, they are frequently found throughout the travel industry, for example: Vail Resorts and Inspirato.  The Epic Pass offered from Vail Resorts offers unlimited skiing and riding at their mountain resorts across the world at one prepaid price. Inspirato offers the Inspirato Pass which offers unlimited nights at vacation homes, four/five-star hotels, and resorts for one price per month, with no additional nightly rates, taxes, or fees.

Our recommendation is for airlines to take the next step beyond the programs offered by EasyJet and Wizz and offer more benefits and privileges, but at a higher price point. When surveyed, 50% said that they were willing to spend more than $200 for a yearly membership, nearly 30% said they would spend more than $300 per year.

Stay tuned for more discussions around new business models and retailing strategies, such as unlimited flights and pay-as-you-go models that airlines can explore and experiment with.

PROS Outperform
Learn how to drive profitable growth at #outperform2023