As one of the world’s consistently most profitable airlines in terms of net profit, this airline had lost its competitive advantage after years of sub-par performance with an older revenue management system. With over 175 aircraft and growing annual revenue, they could no longer tolerate cumbersome manual workarounds that negated the promise of optimal capabilities and results. They terminated their old contract and fast-tracked deployment of the PROS solution. Not only was implementation on-budget and on-time, the new solution helped drive a 10.9% increase in passenger yield, an increase in revenue per ASK of approximately 11.6%, and resulted in a solid use case for other airlines to pattern. 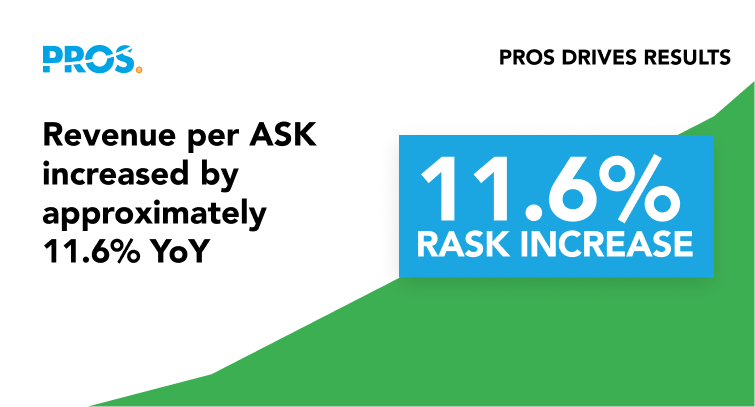 After years and many unsuccessful attempts and “phases” to place into production a complete revenue management system with another provider, the airline ascertained that it had lost competitive advantage in terms of revenue management capabilities. The airline made an unprecedented decision to terminate the old revenue management outsourcing agreement in favor of deploying the PROS solution.

The airline made an unprecedented decision to terminate the old revenue management outsourcing agreement.

With a fast-track deployment path, PROS successfully placed the PROS solution into production on budget and on time. Senior executives were eager to understand the impact of the PROS solution, prompting the airline to analyze the revenue benefits achieved in just the first six months of production use. The results regarding the airline’s profitable performance for the first-half calendar period were cited in the “chairman’s Letter” to shareholders.

“The rise in earnings was mainly a result of a 10.9% rise in passenger yield...driven largely by strong demand from first and business class passengers and the introduction of a new revenue management system (PROS).”

As noted, the period of comparison was of PROS in full-scale production, versus the same period earlier, when the older revenue management system was in production. Since the airline’s load factor year-over-year remained relatively the same—with a marginal increase of only 0.5%—the increase in yield was primarily due to the varying mix of passengers, and not a significant increase in passenger traffic relative to increased capacity. This means the revenue per ASK (RASK) – the all-important metric on revenue performance – increased by approximately 11.6% when compared year-over-year. The prominent mention of the change of revenue management technology in the airline’s financial reporting underscores its significant contribution toward the airline’s overall success.

Over 30 years, many dozens of other airlines, have selected PROS after undertaking their own independent RFP evaluations to seek the best and proven revenue management technology and solutions.

PROS Outperform
Learn how to drive profitable growth at #outperform2023